I bought my 1997 Honda Civic in April 2015, and soon discovered that the front subframe was rusted out. A couple months later I got all the parts I needed, and began the biggest project I’ve done so far on my car. This isn’t a step by step picture walkthrough of the process, but I’ll mention as many details as I remember.

Replacement above, old below.

I picked up a used subframe from a local used parts place for $200, and bought a bunch of bolts I needed from HondaPartsNow.com for about $150. I had Saturdays off from work, so once I was ready, I came in to the shop bright and early at 7 am on a Saturday, grabbed an open bay, and got to work.

With the car still on the ground I disconnected the steering column from inside the car, and tried to remove the rear engine mount. I tried to take out the bolt that connects the two parts of the mount, but it wouldn’t budge, and I broke a ratchet trying to break it free. I ended up just taking out the three bolts at the bottom of the mount that hold it to the subframe.

I got my car lifted up, and went to work on everything under there. The exhaust pipe had to come off, plus the tie rods and lower control arms had to be unbolted from the steering knuckles. The bars that connect the shifter to the transmission needed to come off too, which allowed me to replace the bushings, which were completely gone, leading to a shifter that would flop around and rattle.

The steering rack is mounted inside the subframe, so I needed to disconnect the hydraulic lines running to it. I was able to take one hose off from the rack, but couldn’t get a wrench onto the other, so I had to lower the car down to disconnect the hose from the power steering pump itself. I didn’t want to break those small bolts, so to help them come loose I had to very carefully use the torch to heat them up while also not burning the hose, belt, or nearby engine ground wire.

Once everything was disconnected, I positioned a transmission jack under the subframe and removed the 10 large bolts holding the subframe in. With it finally out the car I could see how bad the rust had gotten. The sway bar mount on the right side, where the rust was, was pretty much gone, and on hard bumps I could hear the sway bar banging against the car.

5 hours in. 5 hours till closing time.

By noon I was almost halfway done, ready to sway the sway bar and steering rack into the new subframe. I was hoping I’d be able to finish before the end of the day, but it had taken longer to get to that point than I’d expected.

Getting the steering rack out of the old subframe gave me some trouble. One of the other mechanics that was helping me from time to time tried cutting out part of the frame so the rack could come out, but it didn’t help. I ended up having to take the remaining steering column joints and boots off, as well as all remaining hose connections, and it was then able to come out. If I’d realized the rack was stuck in the subframe like that I might have considered replacing it while I had everything apart.

The subframe I picked up came with lower control arms, even though I said I didn’t need them. I was going to use them until I realized that they were from a DX model, which doesn’t come with a front sway bar like my LX, so the control arms didn’t have holes for the sway bar links to connect to. Once I got everything attached, it was time to put it back in the car.

With the subframe out of the way I had good access to the rear engine mount to try to remove the bolt from the middle, but the bolt head was rounding off, so I put a damaged bolt removal socket on a 1/2 to 3/8 adapter on my air wrench. Full trigger pull and it wouldn’t budge. I figured it wasn’t worth wasting time on that day, but I’ll replace it when I pull the engine sometime.

Getting the subframe back up in the car wasn’t too hard, with the help of the transmission jack and another mechanic. Like on the way down, it a tight squeeze past the joint for one of the shifter bars. 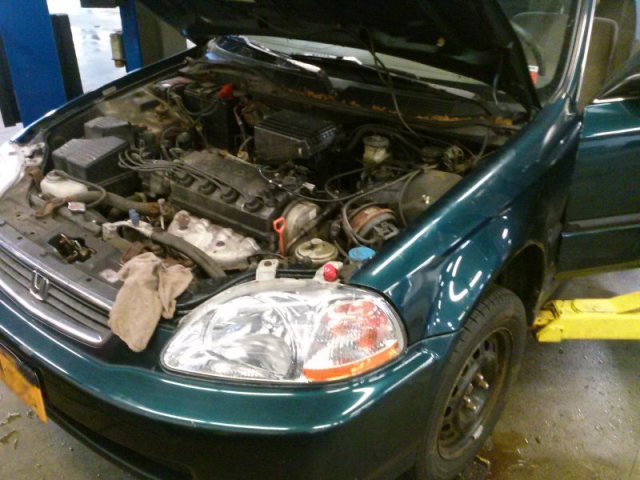 With everything bolted back together on the bottom, I just had to reconnect the rear engine mount, power steering line, and steering column. I didn’t have time to do an alignment at the time, so my steering wheel was off about 75 degrees, but later the next week I got that mostly straightened out.

It was 5 pm when I finally had everything back together and ready to go, which is when the shop usually closes. I still had to clean up and put away all my tools, so they just started locking up so I could just leave when I w done. It took long enough to put away all my tools that I didn’t really want to clean the floor, which was covered in a mix of power steering fluid and rust, so I left a note for the mechanic whose bay I’d borrowed that I would clean the floor first thing Monday morning. I finally left around 5:25, and was very sore the next day.

Hopefully I never have to replace my subframe again, but if I do, I learned a lot this first time and can definitely shave off a couple hours if I do it again.

Like Loading...
This entry was posted in In The Shop, My Car and tagged Damage, DIY, Rust, Suspension, Wow. Bookmark the permalink.