For my first side job for someone other than a family member, one of my friends called me to find a brake fluid leak on her 1999 Buick Century. I found it pretty quickly; it was the short piece of brake line between the right rear wheel cylinder and the brake hose.

A few weeks later I got the chance to fix it. It was my first time working on GM drum brakes, so I looked up a YouTube video beforehand so I’d know what to do. If you’re ever planning on working on your car and haven’t worked on that particular model or done that exact job before, I would recommend looking on YouTube for a how-to video.

Compared to all the Honda and Toyota drum brakes I’ve worked on, GM’s design is much simpler, with only one big spring holding the shoes on. Taking it apart was the easiest time I’ve had doing drum brakes. Once I got them all off it was time to take off the wheel cylinder so I could replace the brake line that was leaking.

I found out that GM decided to use external Torx head bolts to hold the wheel cylinders in, which is a really bad idea for anywhere that gets rust. They were basically just rusty bumps on the back of the backing plate. Luckily it has bolt-in rear wheel bearings, so I was able to pop the whole backing plate off the car to drill the bolts out.

After half an hour of drilling, I finally got the wheel cylinder out and could continue with the job. 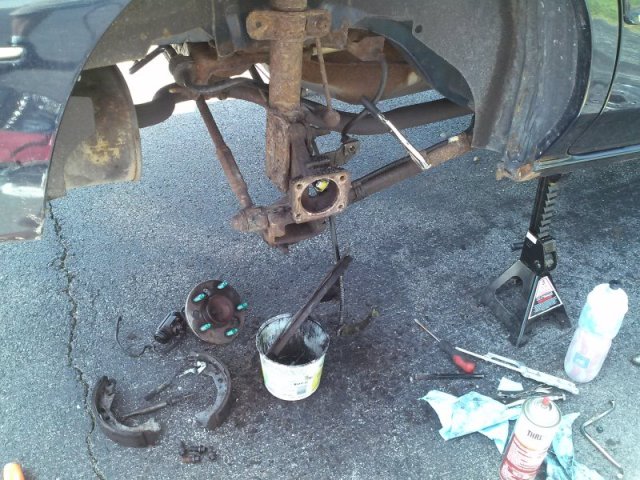 While the GM style drum brakes come apart really easily, they go back together almost worse than the Honda and Toyotas. It took me an hour to finish the right side, and finally could work on the left side, which took another couple hours. I was going to replace the wheel cylinder on that side, but realized that I would need to disconnect the brake line to do that, and with how rusty the right side was, I would need a new brake line, so I decided against that. 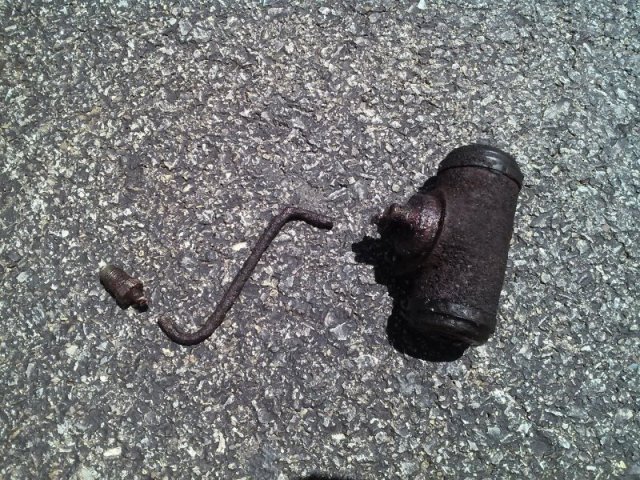 All things said and done, it took me about 6 hours to do the whole job. All for this one leaking five inch brake line. It could have been easier if I’d done it in a shop on a lift instead of a driveway in the sun, but I made more money than if it was a customer at work, and my friend is happy, so I’d call that a win any day.

Like Loading...
This entry was posted in At Home and tagged Brakes, Damage, Rust. Bookmark the permalink.