One day there was a really nice looking 60’s Ford Bronco parked next to the building next door, so I had to go look at it. 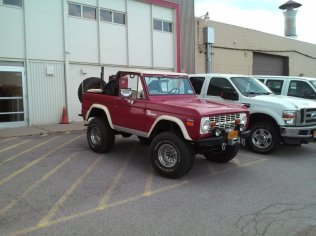 I really like how it’s modified, but not too much. I’m more of a fan of straight restorations, not so much of hotrodding. I’m also a fan of off road trucks, but not extreme ones that aren’t generally practical.

The vintage-looking  Coca-cola cooler in the back is a nice touch. It also matches the color of the truck.

Something I noticed in the front is that the paint on the grille is imperfect, which is nice because it means it’s not a super showy car that doesn’t get really driven much. It’s hard to tell if it gets used for a lot of off-roading, but at least it doesn’t look like it’s just for show.

Like Loading...
This entry was posted in On The Road and tagged Classic car. Bookmark the permalink.