A Honda Element got hauled in on a tow truck one night. Big misfire, running horribly when we drove it into the shop. As I plugged in a scanner to read the codes, another tech started pulling the spark plugs, and before I even got the code for misfire in cylinder 2 he already found it. 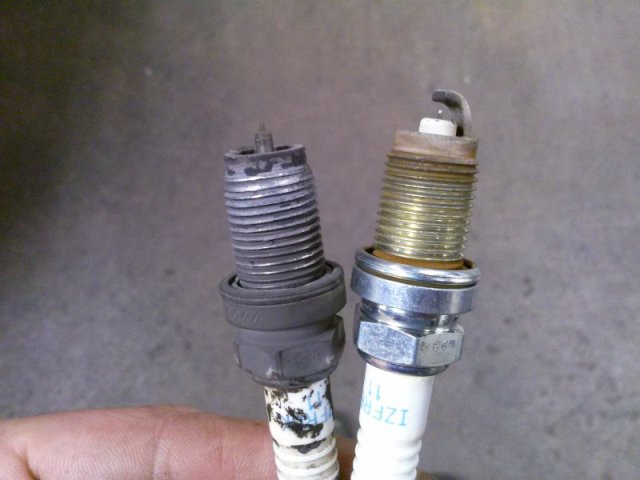 On the right is a good spark plug, on the left is the one from the bad cylinder. Nobody in the shop had seen this type of failure before. The tip was broken off, the porcelain around the middle was gone, and the whole outer porcelain insulator was loose inside the metal part. We looked in the cylinder with a bore scope and could see some little pieces inside, probably the tip from the spark plug. The threads pulled out of the head when the spark plug was removed, which meant the engine needed at least a new head, if not a whole engine because of the bits that could be floating around inside.

These are ignition coils, one connects to the top of each spark plug. You can guess which is from the bad cylinder. Because the insides of the spark plug got loose, heat from the combustion chamber was able to escape and melt the ignition coil.

We went with the whole engine replacement option and got a used one shipped in. Because it was a manual transmission, the easiest way to do the swap was to drop the entire engine and transmission out the bottom of the car on the subframe instead of lifting it out with an engine hoist. It turns out several five gallon buckets are strong enough to support the whole assembly.

Like Loading...
This entry was posted in In The Shop and tagged Damage, Engines, Throwback. Bookmark the permalink.