My Truck: Painting the Bumpers

My 1990 Ford F-250 was originally red, but the previous owner painted it camouflage. There were a few spots that I wanted to touch up when it got warm, especially the bumpers. 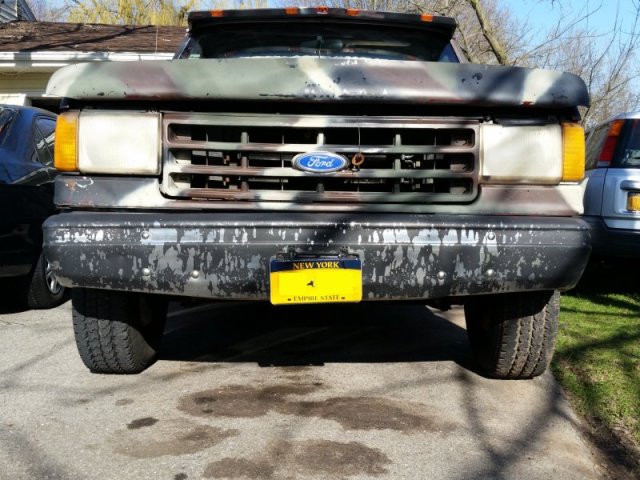 The part of the truck I disliked most was the front bumper. It was obviously originally chrome, and the previous owner’s black paintjob had not lasted very well, so it was the first thing I worked on. 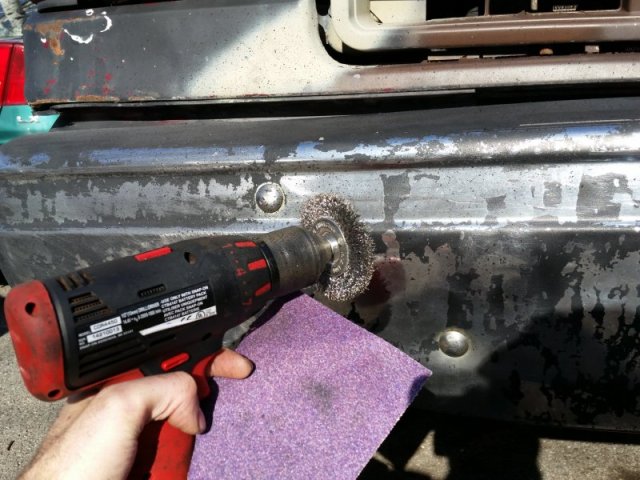 To get the bumper ready to paint I used a wire wheel on a drill and some sandpaper. It felt wrong to use sandpaper on chrome, but with the condition this bumper is in I don’t think any purists could really get mad at me. 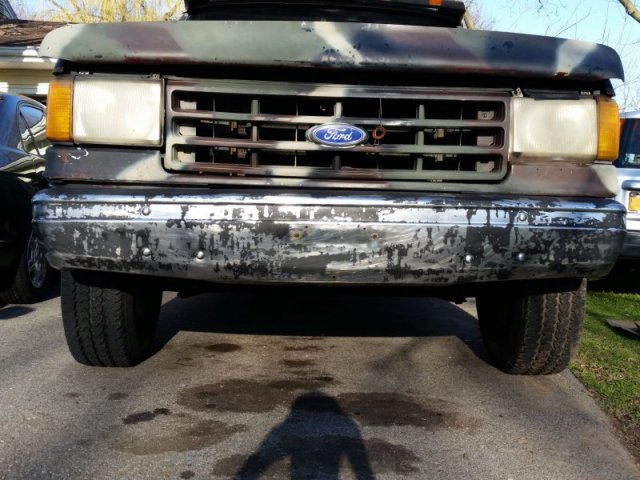 A lot of black paint came off with the wire wheel, and I think the scratches from the sandpaper should help the paint to stick. I’m not expecting it last that long, really, just to look better for a while. 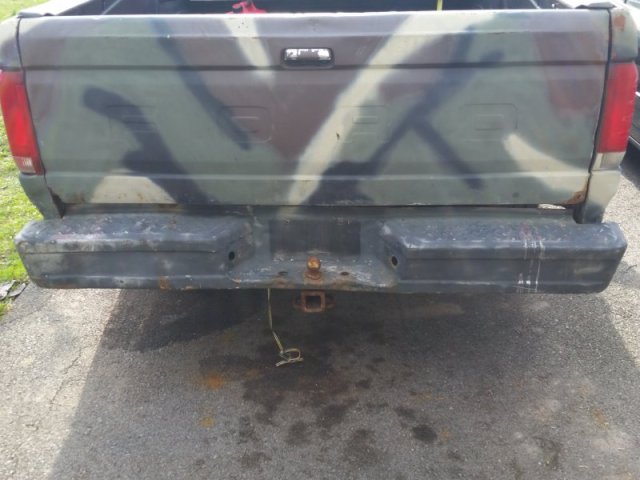 The rear bumper wasn’t as bad looking as the front, because it didn’t start out as chrome, but it also wasn’t too pretty. It was kind of a dull grey with lots of spots of some other color. I quickly sanded it down to get it ready. 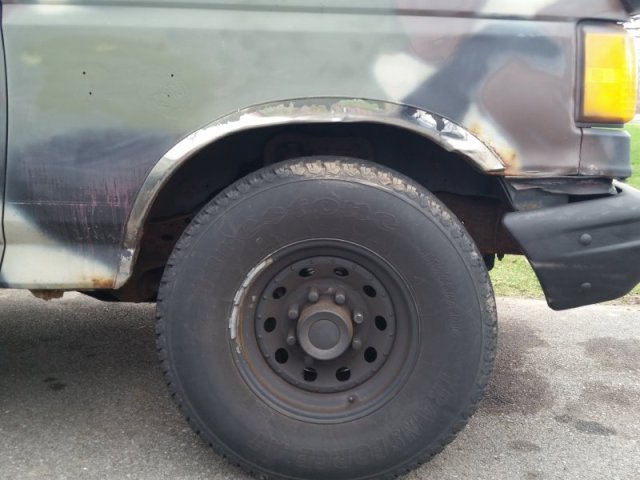 The other parts I wanted to paint were the fender flares, because chrome just doesn’t look right with camo. There was still some paint left on them from the original camo paint coat but most was long gone. Some time with sandpaper is all I did to give it some scratches. 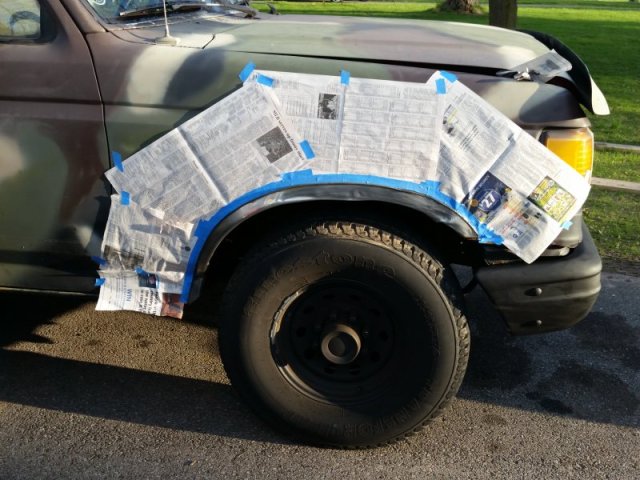 It took a bit of time, and a lot of newspaper, but I masked off everything I needed to to be able to paint the fender flares and bumpers decently. 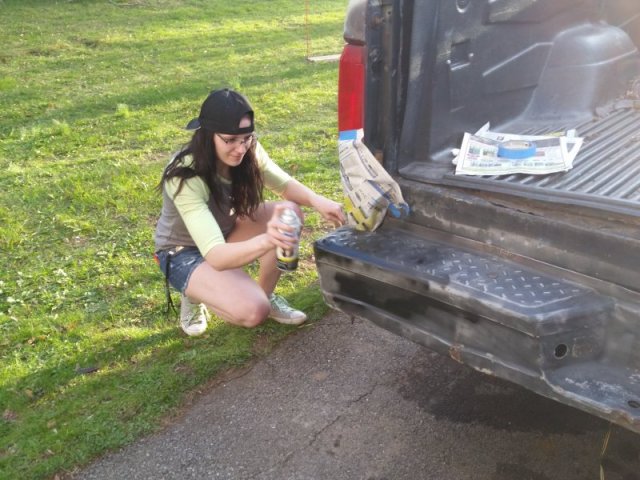 My friend Tatiana came over to help, and it turned out she was a lot better at spray painting than me, so I let her handle most of the work. 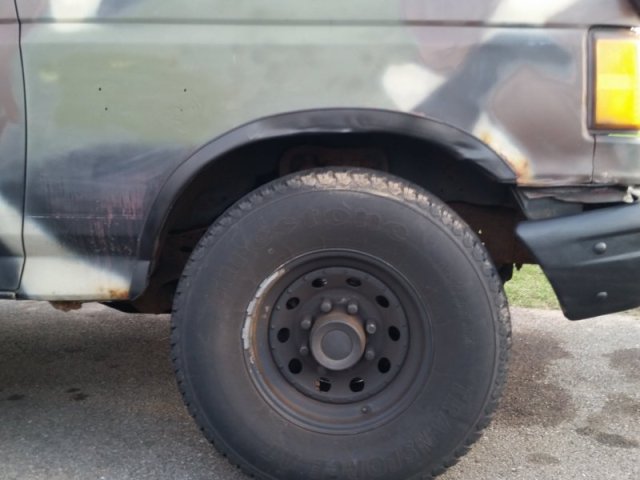 The fender flares turned out really good. Much better match than the chrome. 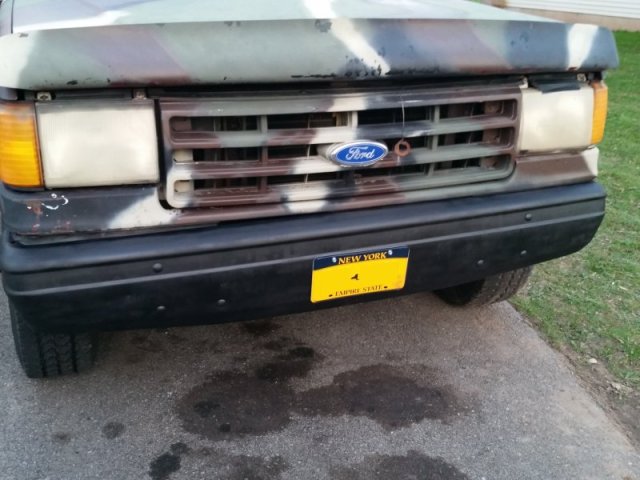 The front bumper looks pretty good, besides some runs from excess when I did the first coat. I also finally screwed the license plate on instead of hanging it from zip ties. 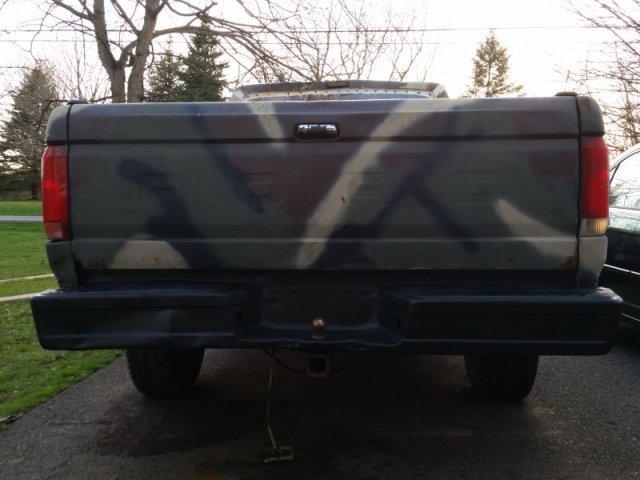 The rear bumper also looks much better, almost like new except for the dents. 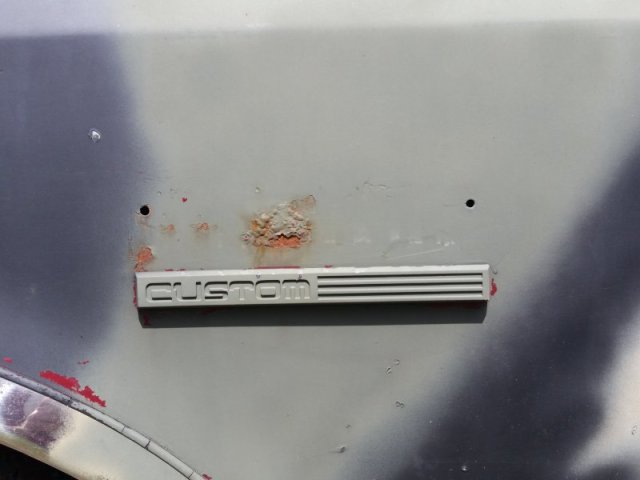 One final touch I wanted to do was the emblems on the sides of the cab. On the left side the only emblem still attached was the “custom” one, but I also had the “F-250” one. 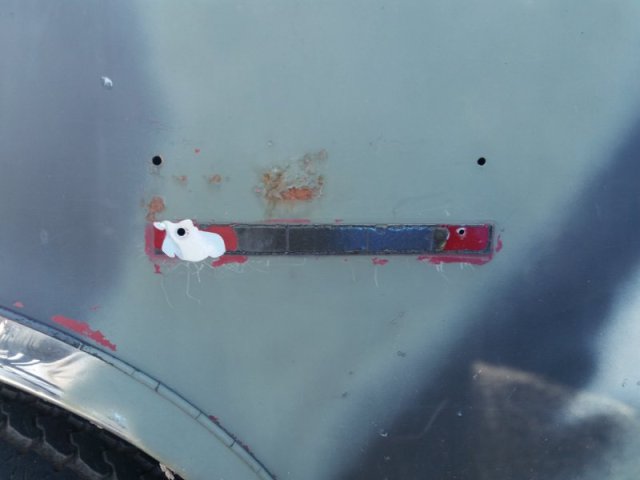 After removing the emblem there was still some of the tape stuck to the cab, as well as some now-exposed red paint, and some rust. 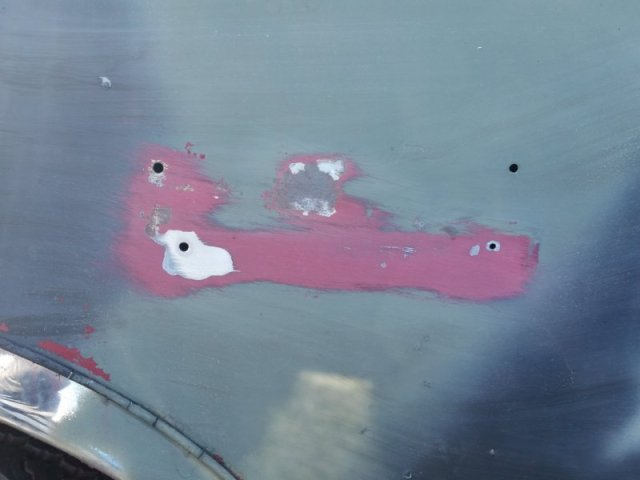 Some time with the wire wheel and sandpaper got it ready for a quick spray of paint.

It’s nowhere near smooth, but it’s good enough for this truck. The paint should be the same color, but I’m pretty sure what was already on the truck has faded a lot. 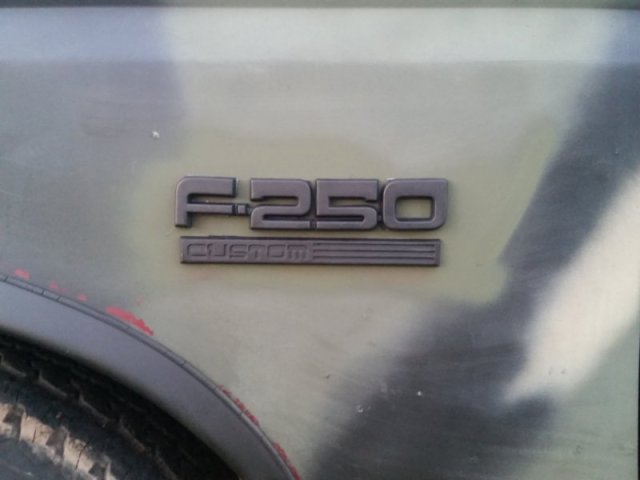 After painting the emblems matte black, I stuck them back on with double sided tape. 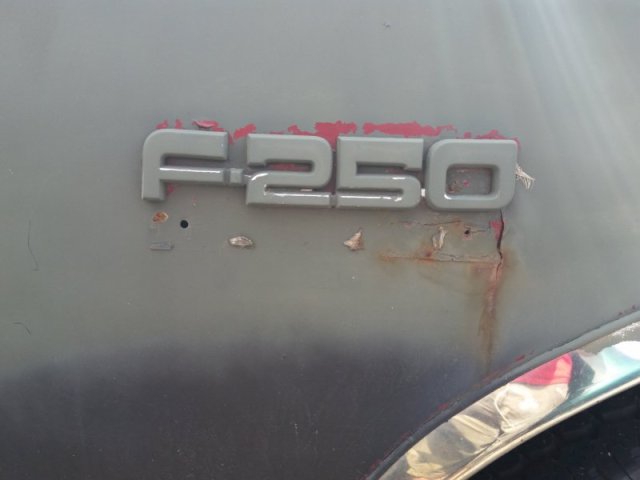 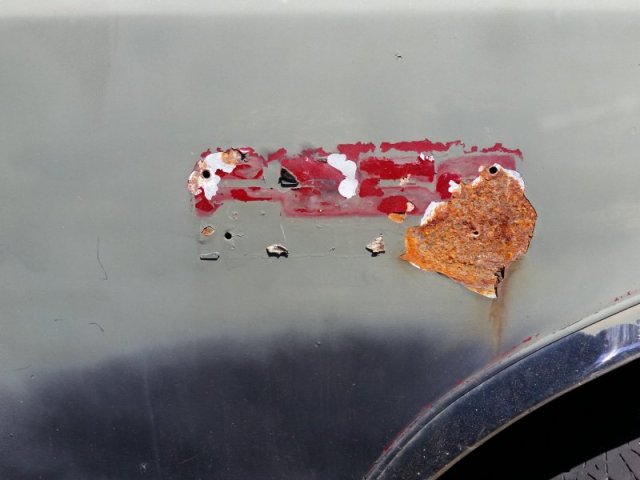 Pulling off the emblem also pulled off a large section of paint. 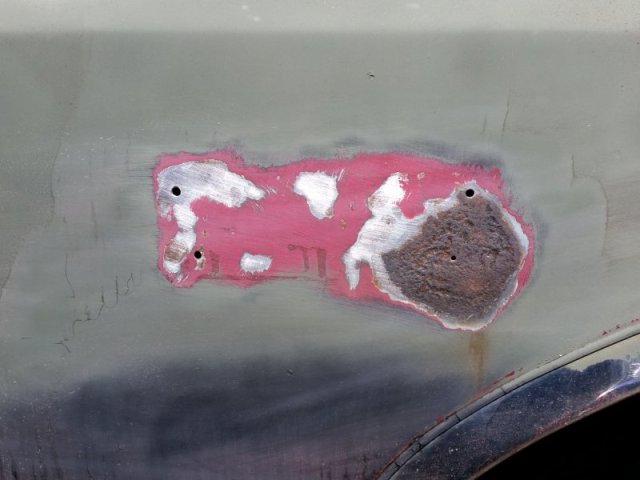 If I was trying to make this really nice I would spend a lot more time on the rusty spot and smoothing everything out, but there’s a lot of rust elsewhere on the truck so it’s not really worth it. 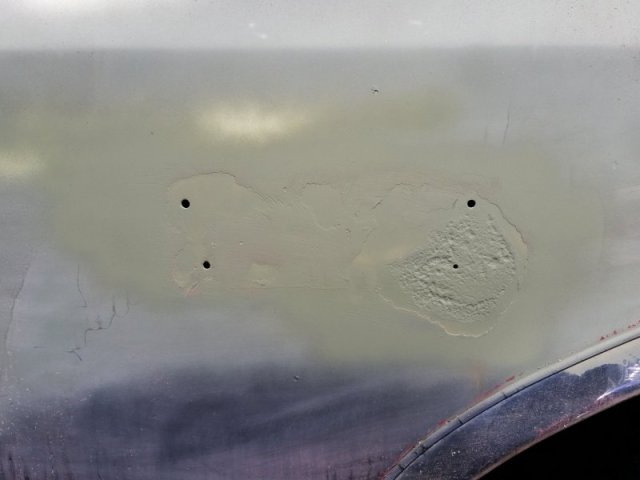 Another quick shot of paint and it’s good enough for the emblems. 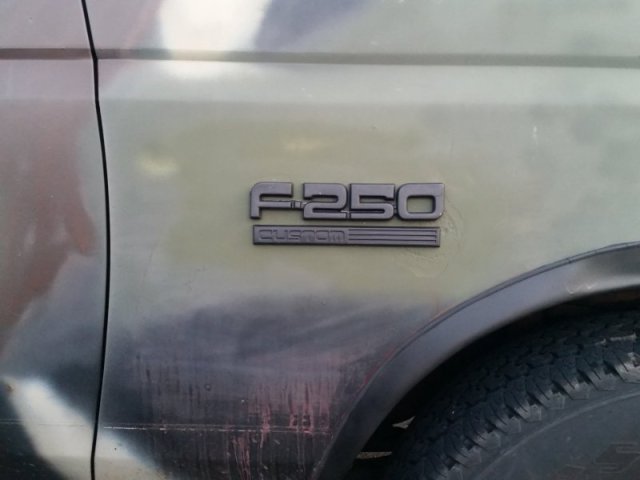 Matte black emblems look so much better with camo than chrome ones. 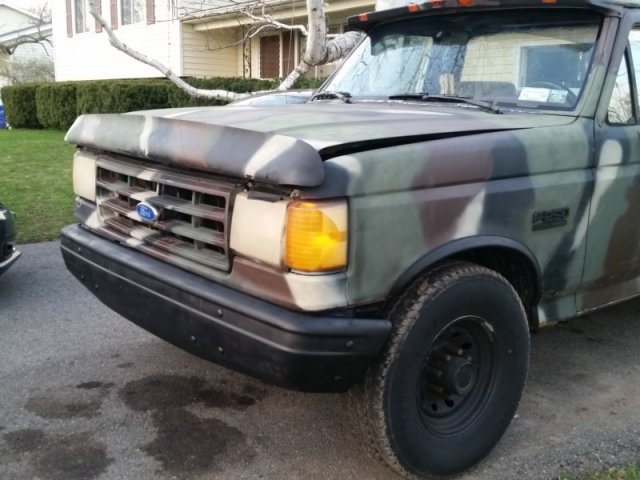 Like Loading...
This entry was posted in My Car and tagged Bodywork, Paint, Rust. Bookmark the permalink.